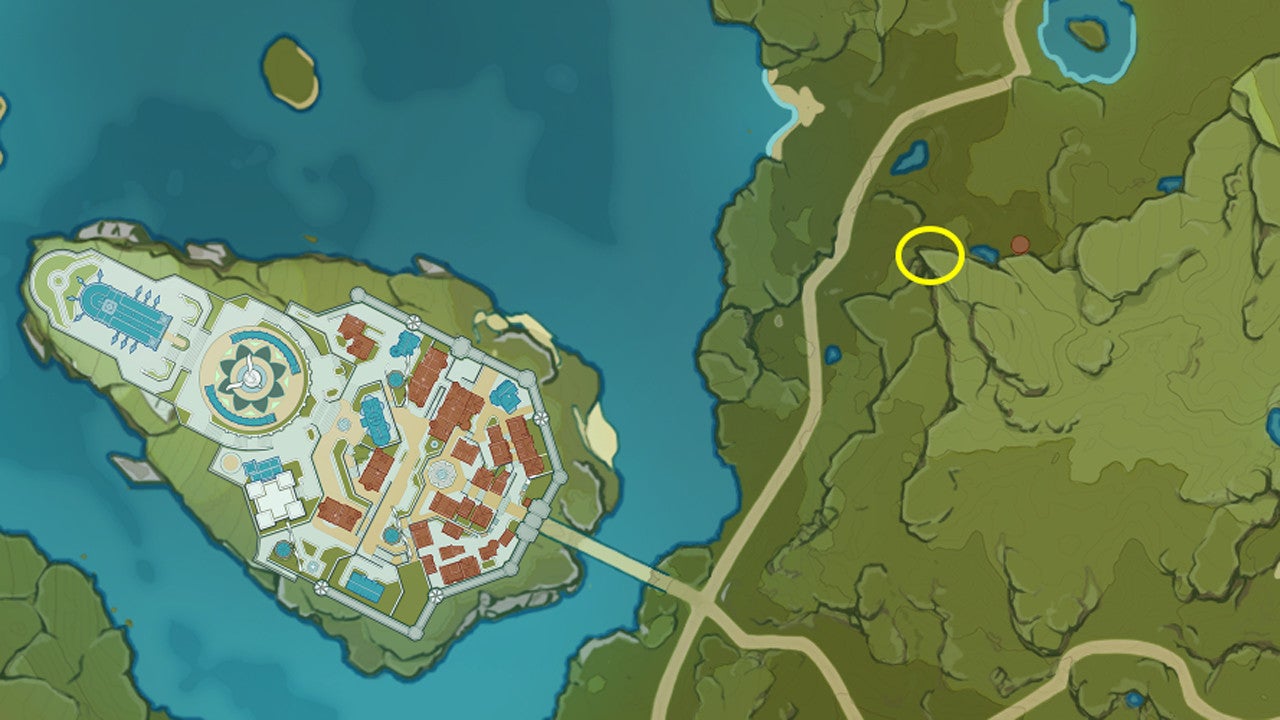 Almost deceptively obscure, the first entry is actually a view of Monstadt rather than a view found within Mondstadt. You’ll find it on the tip of the uppermost pointy cliff edge in the Whispersong Woods.

Another case of climbing high, to get the required view of Mondstadt’s laughably tiny lake, you’ll need to climb the rockfaces to the south east of the Shrine of the Seven located in the center of its waters.

Teleport to the Waypoint just outside Mondstadt and glide south over the pathway. Stick to the hills as you approach the crossing into Springvale and you should find this viewpoint on your left.

From the last point, you should be able to travel South right to fork in the road that goes around and into Springvale. Glide to or climb onto the hills right by the intersection to find this one.

Not far to the South of the arena you regularly fight Boreas in is another stacked set of cliffs. These overlook the Dawn Winery and actually appear rather flat and close to ground level when you approach. Stay on the penultimate level and you should find the spot with a low-angle view of the vineyards below.

This one is literally in your face as soon as you load into the Cathedral in Mondstadt. Take the Waypoint to the Favonius Headquarters, glide across to the grand staircase, and walk through the large front doors. Easy.

Why this one couldn’t come before the last is the real question. If you haven’t jetted off from the Favonius Headquarters Waypoint yet, jump down to the front doors, load in, and take the fight door on the right to find Entry 7 right on your right. Right, next one.

Alright, it’s time to head back to the spot of the Alchemy Furnace event. Rather than take on the Ruin Guard wandering around the middle, sneak around it to the rear end of the area. Scale the bleachers and climb up to the sliver of structure stuck in the mountains to the left and you should find your next spot.

Now this one isn’t hard at all. It’s a path you’ve likely walked many times before. Take the west road through Daduapa Gorge and you’ll walk over it as you approach the water. Just stick to the path and you can’t miss it.

Again, it’s good to remember this isn’t necessarily in the lair of the great dragon. It’s a great view of it instead. Take the Brightcrown Mountains Waypoint to the northwest of Mondstadt and climb the plains up toward the edge of the valley that is Stormterror’s Lair. You’ll find it on the cliff underneath the B of the area’s name on the map.

Before you head into Liyue Harbor to find the three Viewpoints hiding within, you’ll want to take in the sights the sailors get as they prepare to make land after a grand voyage. Take the Waypoint on the road into the city and head away from it. Climb the first cliffs that start to jut out toward the ocean and you’ll find the best view of the port you ever did see.

Just requiring you stop and take in the view the general public get when they cross through Liyue’s commercial district, you’ll find this viewpoint right by the guards under the archway leading into the next.

It’s a little tough to see in the screenshot above, but you’ll find this on on the path down to the east-most area of town. It’s in a pedestrian-friendly area, so don’t worry about looking high and low for this.

You’re off on a climbing adventure for this one. It’s time to become Liyue’s version of that one guy who’ll put on a Spider-Man consume and slowly scale a tall building. Bringing Venti or a Geo Traveler can help you scale fast. Get to the roof of this grand structure and you’ll get a divine view of Liyue’s skyline.

Build right into a chunk of rock, Liyue’s Wangshu really is a sight to behold. To take it in, you’ll want to travel back along the path you likely followed to find it in the first place. Hop onto the stone wall of the bridge before its own and you’ll find your viewpoint.

Use a Waypoint to teleport back to the old stone stairs that bring you in from the Dawn Winery down into Liyue. Head down the stairs and the walkway, then jump down onto the sliver of cliff that’s left down below as you reach the end of the walkway. You should see a rock being washed by the ocean amongst the reeds. That’s where you’ll find your waypoint.

Back to where a certain mostly useless researcher sent you, the ruins around this area of Liyue hides a great view. Follow the path down from the folk and hug the cliffs on your left. You’ll soon happen upon the spot overlooking the the curious perfect circle of water.

Teleport back to Qingce Village and ride the rice paddies down the waters surrounding it. On the small patch of land between its two bridges, you’ll find the eight Liyue viewpoint sitting on the second bridge’s supports.

Right down the southern end of Liyue is Jaeyun Karst – and area that must have something to do with those identically named chillies you find scattered about the place. It’s a craggy area, but follow the path around to the beach. Stick to the upper cliffs to the east, though, and you’ll find your waypoint dishing out a clean view of the clear waters below.

Head a little further west from the last point either by folloing the road and riding the mountain down, or squeezing through the gap in the rocks as the path begins to head north.

Either way, you want to get close to the first patch of the spotty marshland – the puddle that looks a little like an otter admiring its favorite rock. Keep on the hills and you’ll find this viewpoint just above it.

The Huaguang Stone Forest is the spot with those flat rocks with the swirl motifs going on. You might have thought they looked a bit like giant mushrooms growing on the side of a cliff. Well, whatever you think of them, they’re your spot for Entry 11. Climb you way back up from the last entry and you’ll find them near enough at the top. Just perch yourself on the edge.

Back to the site of a pretty paining is it. Proving the guy who lost his brushes high in the mountains had a good eye for landscapes, you’ll find this glowing marker on the stump he sat on to get a clear view of the rock pools.

Back to a spot within view of Liyue Harbor, rather than perching yourself on a cliff edge, you’ll want to dive down to the beach below. You’ll find this blue marker sitting on a rock close to the wall. Feel the wind on your skin while you’re there. Take some time for yourself..

Toward the tail end of Liyue to the West is the once-popular mining spot known as Chasm. Either follow the road through the mountains, or glide off the cliffs to the east. You’ll be on mostly flat ground once you land, so look out for this one on another small rock poking out of the ground. It’s actually right by the dirt road running around the mining camp, so follow that if you’re having trouble. It doesn’t show on the map.

After that, head north into Dunyu Ruins. Cross the dilapidated location to its less water-logged area. Hug the mountain edges on your left and start climbing as you squeeze through a bit of building and you should find this one on another cliff edge high above. Your mini-map will start to blink as you approach the end of the explorable area, but you shouldn’t ever cross it.

This one is easy. Just a glide away. Teleport to the waypoint just south of the map marker here and you can glide straight from it all the way down to the cliff edge where this blue viewpoint marker makes its home. It’s overlooking the big rock with the tree root sticking out of it on the small island.

Of course we couldn’t end this journey without taking in the sights of the nine stone pillars scattered around Cuijue Slope. Take the Minlin teleporter to the north of the zone on the map and climb the mountain to the south. Charge straight on along the camp and launch yourself off the cliff. Glide down, keeping an eye on the left cliff face, and it should open up to reveal the blue marker sitting on a log.