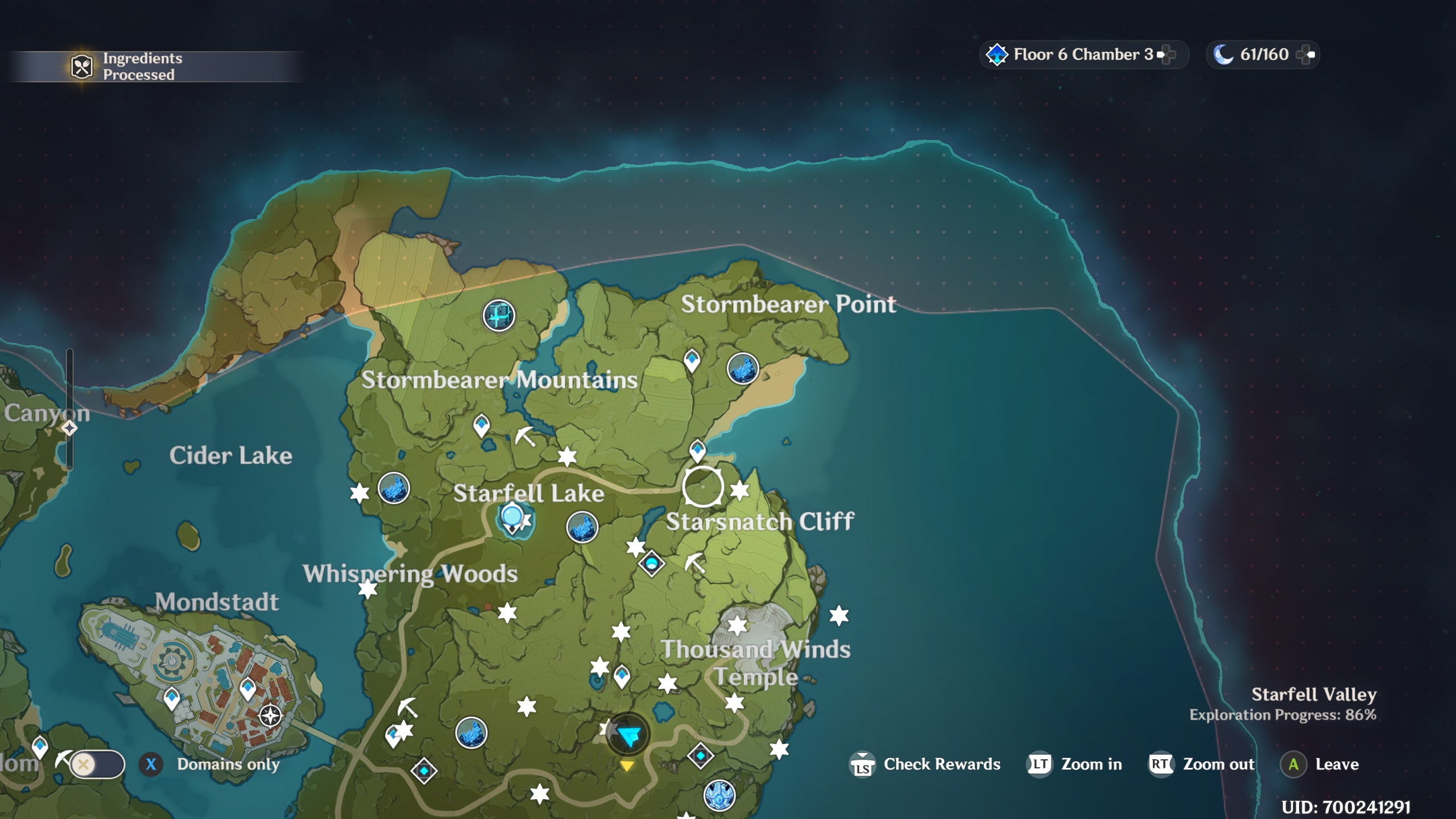 For this, you want to head over to Mondstadt’s own Starfell Valley. This region consists of Starfell Lake, Whispering Woods, Starsnatch Cliff, and the Thousand Winds Temple. Refer to the map below to find your seven, then carry on collecting them if you want to pad your pockets. You won’t need to head north enough to hit Stormbearer Mountains and Stormbearer Point, so don’t bother climbing the cliffs.

While you’ll find plenty of meteorite fragments at Cape Oath itself to the east, Daduapa Gorge hides plenty of the little rocks, as well. Together, they make up Galesong Hill, and you’ll be hard-pressed to avoid a fight with the hilichurls if you wander too far into their camp.

We’re to presume this quest is named after the Demon Star and not the old computer programming language. You’ll easily find your seven meteorite fragments across the sands of Yaoguang Shoal itself, but come in from the east of the Guili Plains and you’ll pick up two freebies. Carry on close to the Mingyun Village if you want, and you’ll have yourself an impromptu tour of the collective Qiongji Estuary region.

Jueyun Karst is just a small subsection of the Minlin region spanning the northwest of Liyue. Funny enough, Jueyun Karst itself barely has a rock to speak of. Instead, it’s a gateway to the mountainous region of the map holding the most. Expect lots of climbing and gliding here, so make use of the wind currents and pinwheels to get around.

You’ll learn a lot about the history and origin of Guyun Stone Forest from the most recent Archon quest “Chapter One, Act Three: A New Star Approaches”, so now’s a great time to explore the area once more. Follow the shallow spots around the islands and you’ll track down almost two dozen of the little bricks. Just watch out for the island housing a bunch of sleeping Ruin Guards.

Qingce Village is tucked away inside Wuwang hill which, together, make up just one part of the region known as Bishui Plain. Just following the path around Stone Gate can get you the seven you need as you make your way to the village. If you want more, scale Wuwang Hill as well!

Getting a precise image for each and every meteorite location just isn’t feasible, but on top of the pin-accurate spots on the map, here are a few tips to keep in mind if you’re having trouble locating a specific rock.

Anyone but the Traveller and Venti can use the glow of their Vision accessory to track rocks down. The brighter the glow, the closer you are.

The mini-map doesn’t care about elevation when it comes to meteorites. If there’s a high point in the area, it’s probably up there.

Nearby enemies love meteorites, too. If you see one or more scratching the ground or otherwise huddled up looking down, they’re probably hiding the rock beneath their feet.

Meteorites tuck themselves in

If you’re looking around cliff edges to no avail, check in the crevasses between rocks and rubble. Meteorites seem to sit themselves in these little corners.