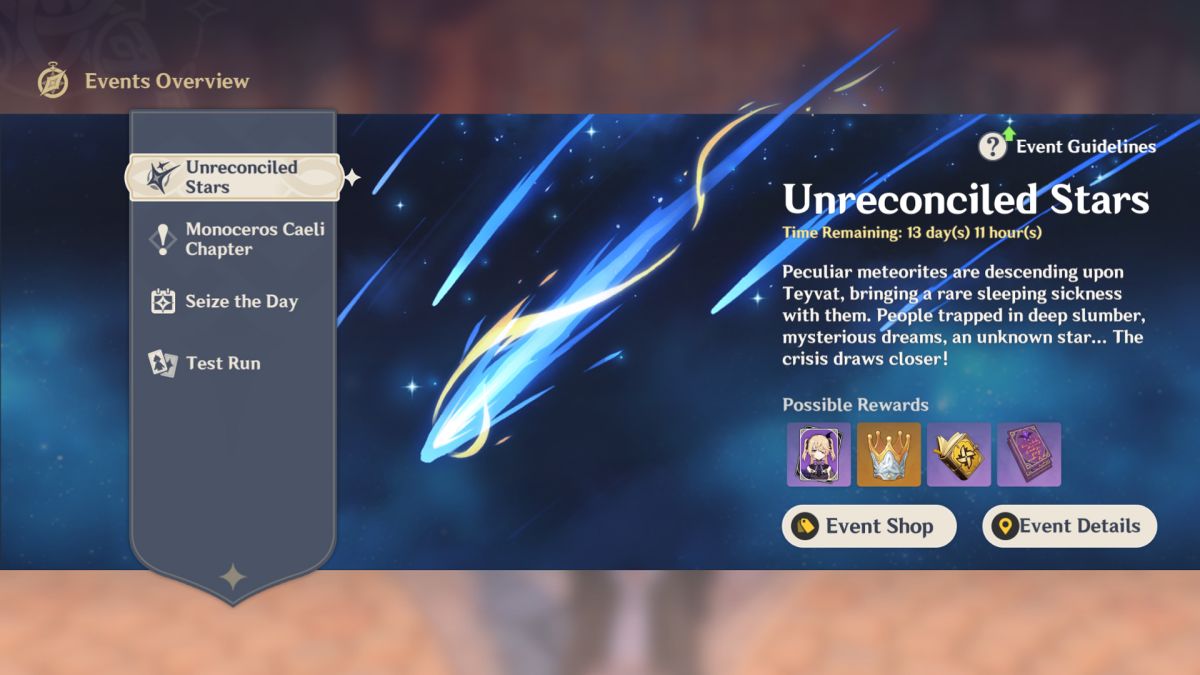 Not only is this another chance to be the hero of Teyvat, but you will also have the opportunity to get some Talent Level Up Materials, Character Level Up Materials, Primogems, Mora and the ‘Prinzessin der Verurteilung’ Fischl. The event consists of three different Phases and a lot of extra activities, so there is a lot to do. Here is everything you need to know!

How does the Genshin Impact Unreconciled Stars event work?

To find the event page, go to your Event tab in the main menu, click on ‘Unreconciled Stars’ and then on ‘Event Details’. Note that you need to be Adventure Rank 20 or higher to participate. This event will run from November 16 to November 30, but the Event Shop will remain open until December 6. Make sure to claim all your rewards before that date!

Finally, a number of characters will receive a damage boost of 60% during the event, so you might want to put them on your team. The boosted characters per Elemental type are:

How to get Fischl in the Genshin Impact Unreconciled Stars event

The biggest reward of the Unreconciled Stars event is the Electro character Fischl. She is generally considered to be an asset to your team, so make sure to complete all three challenges necessary to unlock her. If you already have a Fischl on your team, you will get Constellation material instead. These are the challenges you need to complete:

You don’t need to spend your Fading Star’s Might or Fading Star’s Essence on Fischl. Instead, you can use it to buy Character and Talent Level Up Materials in the Event Shop. Find it in the lower left corner on the Event Page.

You will also be able to gather a lot of Primogems and Mora by completing the Meteoric Wave quests. During the first Phase, you will get 25.000 Mora, 40 Primogems, and 20 Fading Star’s Might for each completed quest, up to a total of three.

Finally, do not forget to collect the Battle Pass rewards. Two special event challenges are added to this BP period: salvage 18 Meteorite Remains and salvage 6 Meteorite Cores. You need to do the challenges in Phase 2 and 3 to complete them.

How to collect Fading Stars in Genshin Impact

Start by clicking on ‘Unknown Star’ on the Event page and accept the quest. You need to speak with Adventurer’s Guild’s Katheryne in Mondstadt. This will trigger a cutscene to introduce Fischl and the story of the meteorite showers.

After that, go to Spring Vale and talk to the three people who are watching over the sleeping illness victims. Then go south to find a character called Allan, safe him from some slimes and collect two pieces of meteorite. Finally, return to the victims and talk to the nun. This will complete the first quest and unlock the Unknown Star – Overture.

You are now able to start salvaging Fading Star’s Might in the first Phase.

The Unknown Star – Overture consists of three challenges. To complete each one, go to the indicated area (click on the pin right of the challenge) and collect seven meteorites. This will reward you with 30 Primogems and 20.000 Mora. On top of that, every meteorite you collect counts as one Fading Star’s Might which you can spend in the Event Shop.

It is quite easy to find the meteorites. Just fast travel to the right area, and blue circles will automatically pop up on your mini map. There is one meteorite in each circle. To find their exact location, look for a glowing light. It is also advisable to turn on the game’s sound, as the meteorites will make a zooming noise when you get close.

Keep in mind that while you only need 7 meteorites per area, it is possible to collect more of them to buy materials in the Shop. Three new salvage quests will be added on November 17, but you will need to complete the first three to get started on the rest.

Phase 2: How to complete the Meteorite Remains Salvage Challenge

Once Phase 2 starts on November 18, you will need to complete ‘The Crisis Deepens’ quest to unlock the ‘Meteorite Remains Salvage Challenge’. Unlike Phase 1, you will not just be collecting shards this time.

This challenge allows you to choose your own difficulty. Depending on which one you choose, you will get 15, 20 or 25 Fading Star’s Might. Do keep in mind that it costs 20 Original Resin to collect the reward. Failing the challenge will not cost you anything though, so feel free to try a higher difficulty.

Phase 3: How to complete the Fallen Star challenge

Complete the quest ‘What the Skies Conceal, the Water Reveals’ to start Phase 3, ‘Star of Destiny’ on November 23. During this Phase, you can complete the Fallen Star challenge to get Adventure Rank EXP, Companionship EXP and Fading Star’s Essence. The exact amount depends on your World Level. This is the only Phase that rewards Fading Star’s Essence instead of Fading Star’s Might, but collecting it will cost 40 Original Resin.

You can choose to start the Fallen Star challenge in either Single Player or Co-op. Once it starts, your goal is to collect celestial energy which is released by defeating monsters. You can keep track of the energy submission progress and the time you have left in the middle of your screen. Keep in mind that the amount of celestial energy you can carry is limited. Furthermore, if you get hit while submitting your collected energy, the energy will be lost.

Unlocking each Phase will also unlock three additional quests as part of the ‘Meteoric Wave’. You can find them in the lower left corner on the Event Page. If you click on them, they will appear in your Journal. Each one of them will ask you to travel across the Mondstadt region to talk to NPC’s and occasionally defeat some enemies, in return for extra rewards.

Now that you’ve completed all these challenges and quests, all there is left to do is spend your hard-earned Fading Stars and collect that Fischl!